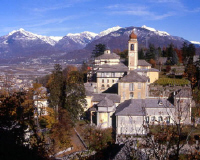 The Sacro Monte Calvario was erected beginning in 1657 along the road to climb to the Mattarella mountain that overlooks Domodossola and it was meant to reconstruct the episodes of the Jesus' Via Crucis(Way of the Cross).

It is made up of a series of twelve chapels that represent the Stations of the Cross and three chapels that illustrate the Deposition from the Cross, the Holy Sepulchre and the Resurrection. At top of the hill is the octagonal sanctuary of the Holy Cross.

In 1810 the Capuchin Fathers were removed with the abolition of religious orders, and their convent later became a police station. The first chapel, confiscated by the Military property and used as mine powder, caught fire and blew up.

The Abbot Antonio Rosmini founded in 1828, not far from the Sanctuary, l’Istituto della Carità(Charity Institute), that contributed to the re-launching and the restoration of the .

The path begins at the outskirts of Domodossola from the tree-lined public square in front of the church of the Madonna della Neve ( Madonna of the Snow).

From : by car, from Canton Valleseby means of the Passo del Sempione()

By train
Stations:
From Milan: Simplon International line.
From : via Novara-Arona, or Novara-Borgomanero.
From for the Centovalli.
From Canton Vallese: Simplon International line.
From Canton Ticino: Locarno-Domodossola railway.
From the station go up to the Calvarioin a just few minutes by taxi or using the bus service with departure and return to the Domodossolarailway station.