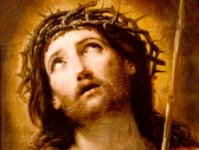 Your greatest friend, a friend whom you perhaps do not know yet, has been sent to you by God. He was born by a simple woman. The same birth is a fact that confuses the reasoning of wise men and of which no scientist on earth has ever penetrated the secret. He challenged human nature in order to be able to redeem the human race. He became the Son of the man so that we could become sons of God. He lived in poverty and grew in the darkness. Once alone, in his youth, he went beyond the frontier of his province. He did not have the advantage of receiving a good and distinguished education, since his family did not have assets or influence. Nevertheless, still a boy, he was reason for terror for a king. Still a boy, He astonished and embarrassed the doctors of law. At a mature age, he commanded to nature itself, walking on the waves of the sea, he ordered the storms to calm, restoring the health of the body to the multitudes, raising the dead with only the power of His Word.
He has never written a single book and in any case, no library could contain all the books that have been written about or that regard him.
He has never composed a hymn, yet the number of melodies that celebrate His praises are such that all the assembled composers could not equal him.
He has never studied nor practiced medicine, but who could ever say how many hearts broken by suffering have, in no less than nineteen centuries, found in Him their healing?
It has never commanded an army, nor recruited a single soldier, nor handled a single weapon, yet no commander has ever had so many voluntary followers.
On the contrary, throughout the world, some rebels have laid down their weapons of revolt and submitted their will to His will without any gesture of violence, with the mere task of gentleness.
It has changed His purple clothes for the humble cloth of the craftsman. He was rich and he made himself poor for the love of us and just how poor! Ask it Mary, ask it the shepherds and the magi… He slept in a manger that belonged to another. He crossed the lake of Genezaret on the boat of another. It made his entrance into Jerusalem, on the day of the Palms, on the ass of another. He was buried in the grave of another.
Some great men were born but they have been forgotten. Only he will never be forgotten. Herod was not able to kill him and Satan was not able to impede His work. Death has not been able to destroy Him, nor the grave to withhold His power. He is the incomparable Christ, the Admirable one announced by the voice of the prophet of ancient times. His person is the great miracle of the history of the human race; on his human face, the eternal Glory of the highest one radiates. He died on a cross of slaves and criminals, oh sinner, for your lost soul. He died a horrible death, crushed under the weight of OUR sin, of YOUR sin.
Patiently, year after year, along the paths of doubt where you escaped His steps, HIS FAITHFUL HEART looked for YOU and you did not know it. Now His voice speaks to YOU. Open YOUR heart.
Do not delay further.
He suffered death to give you life.
Today, precisely today, He wants to feel that YOU too call him and will always call him: “MY SAVIOUR”.